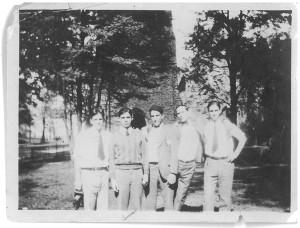 The photo of my father at the beginning of his freshman year at Lehigh inspired me. In Sept., 1927, he was 17, just like I was when I started at Rutgers in the fall of ’64. I think the photo tells a story. Five boys who’d only just met, days before. Away from home for the first time, anxious to make new friends and find out where each fit in. Like my father, some were probably the first in their families to ever go to college. Quite a big deal. They probably felt on top of the world – anything was possible. “23 Skidoo!” “Oh! you kid!” Hot jazz, hip flasks at football games, pretty girls with bobbed hair and short skirts. “Rah! Rah! Siss boom bah!” “Hold that line!”

I wonder if any of those farmers in the Pennsylvania Dutch countryside kept on brewing beer from recipes brought over from the old country? I wonder if the odd keg of beer found its way to a party held by Lehigh boys every so often? I’ve heard that not everyone scrupulously observed Prohibition, so I guess it might have happened.
Sixteen years later, my father was in North Africa, keeping the planes flying and dressed none too stylishly, living in a 4-man tent and taking his meals in a chow line. I wonder how many of the other boys in this photo made it home.

The photo tells the story of a happy time long ago – the music takes you there.

“College Days” is planned for the autumn of 2014. These are the songs I’m planning to record: